Mayor Rahm Emanuel and a bipartisan coalition of 18 states plus the District of Columbia, nine cities, four counties and the U.S. Conference of Mayors submitted a formal comment today regarding the upcoming Cen­sus urging the Census Bureau to reconsider its decision, in a reversal of longstanding Bureau practice, to include an unnecessary citizenship question that will impair the Bureau’s essential function of counting all people in the 2020 Census.

Our coalition, which together represents tens of millions of residents throughout the country, is imploring the Census Bureau to reconsider their decision to include this harmful and completely unnecessary citizenship question,” said Columbus City Attorney Zach Klein.  “Last year, Colum­bus received almost $100 million in federal funding for grant programs that rely on population data collected in the census. With a large and growing immigrant community, the possibility of losing those dollars is a very real threat and would directly impact our residents lives.”

“The federal government should encourage every person living in our country to participate in the Census instead of putting up barriers that intimidate people from being counted,” Attorney General Lisa Madigan said. “I am filing my objection today and am pursuing litigation against the federal government to ensure that immigrants in Illinois are represented fairly and accurately.”

The Trump Administration’s decision to add a citizenship question reverses decades of past prac­tice.  In 1980, the Census Bureau rejected the addition of a citizenship question, concluding that “[a]ny effort to ascertain citizenship will inevitably jeopardize the overall accuracy of the popula­tion count. Obtaining the cooperation of a suspicious and fearful population would be impossible if the group being counted perceived any possibility of the information being used against them. Questions as to citizenship are particularly sensitive in minority communities and would inevitably trigger hostility, resentment, and refusal to cooperate.”

Adding the citizenship question to the 2020 Census is the latest effort by the Trump Administra­tion to suppress response rates by members of minority and immigrant communities.  In February, Mayor Emanuel sent a letter to Commerce Secretary Ross outlining concerns regarding the Ad­ministration’s lack of outreach and intentional efforts to limit participation.

SAFETY PLANNING GUIDE FOR PARENTS WHO ARE UNDOCUMENTED

Loyola University Law School, in collaboration with other law schools and community agencies has  created a Safety Planning Guide for Parents in Illinois who are Undocumented. This guide assists with instructions on helping children plan in case of detention or deportation.

Please distribute as widely as you can.  To the extent possible, we’d appreciate hearing from you on how the Guide is being distributed and any other feedback.

And if you have any updates that should be made to the Guide over time, please let me know at aweinbe@luc.edu.  Lauren Schroeder, who spearheaded this effort, moved on to the Domestic Violence Legal Clinic as a Staff Attorney when her post-graduate fellowship ended this summer at the ChildLaw Policy Institute.

Thanks so much.  And please feel free to contact me if you have any questions.

Doctors Without Borders/Médecins Sans Frontières (MSF) is coming to Chicago’s Richard J. Daley Center with Forced From Home, an interactive exhibition on the global refugee crisis from September 23rd  – 30th, 2018! Open daily to the public Mon-Fri from 4pm-8pm and Sat-Sun from 10am-6pm.

The Chicago Commission on Human Relations is looking for qualified candidates to apply for the position of Human Relations Specialist II. The position is part of the department’s Inter-Group Relations Unit which mediates community conflicts, conducts human relations work­shops, and assists victims of hate crimes. The job description is attached.

Applicants fluent in Polish, Arabic, Hindi, and Mandarin are encouraged to apply. The starting salary for the position is approximately $55,000.  All questions and inquiries of any nature con­cerning this position must be directed to the City of Chicago Department of Human Resources,312-744-4976.

ART WORKS Projects is pleased to invite you to a panel discussion featuring Chicago-based leaders who advocate for immigrants at the local and national level. The panelists will address the complexities of immigration policy in the U.S. while considering the impact of deportation on families and their communities.

This event is free and open to the public.

This ART WORKS Projects event is presented in tandem with “Deported: An American Divi­sion” by Emerging Lens photographer Rachel Woolf. This project began in late July 2017 when Woolf met Lourdes Salazar Bautista days before her deportation hearing in Detroit. Bautista had been living in Ann Arbor, Michigan for the past 20 years along with her children Pamela (19), Bryan (14), and Lourdes (16) who were all born in the United States. Though the family was hopeful that Bautista would be granted permission to stay in the U.S., it was determined at her hearing that she would be deported. Bautista, along with her two younger children, left for Mexi­co soon after the hearing in August 2017.

Every day, 44,000 people are displaced from their homes because of violence, persecution, or war. The United Nations Refugee Agency reports that over 68.5 million people are forcibly displaced worldwide, 25.4 million of whom are registered as refugees. More than half of those registered are children. Despite this ongoing crisis, last year the United States set its lowest ever resettlement goal of 45,000 refugees, and to date, has only resettled 18,214 refugees this fiscal year. This is one of the lowest numbers of refugees the U.S. has resettled in the history of the program, at the time of the greatest need. We can do so much more.

Refugees bring immense value to our communities. Refugees have reinvigorated our econo­mies, brought innovation to our towns, and made our communities stronger through their con­tributions to our public life and cultural institutions. They are students, business owners, dedi­cated employees, customers, elected officials, and community leaders.

We are better and stronger because of them. We encourage you to visit our communities and hear directly from our constituents, including refugees themselves, about what this life-saving program has brought to our country.

Mayor Rahm Emanuel and Alderman Patrick O’Connor today joined the Department of Family and Support Services and Chicago Public Schools to announce a new early education center at Passages Elementary School – the fourth center to be announced this year. The centers provide quality early learning services, just as new data from CPS underscores the benefits of ramping up free pre-k for all the city’s 4-year-olds.

“For decades Chicago children started school when they were six and had the shortest day and the shortest school year of any group of children in the country. With the gains we’ve made and by expanding free pre-k for all, they’ll now be in class at 4 and have nearly four more years of classroom time by the time they graduate,” said Mayor Emanuel. “This newest data reinforces why we’re making these investments, which are fundamentally about giving every child from every neighborhood their best chance to succeed.

The new early education center at Passages Elementary School in the West Ridge community will serve approximately 100 children in the 2018-19 school year, and scale up to 160 children starting in the 2019 – 200 school year. Facilities and programs will also be developed to support the whole family, including a computer lab, and programming for Adult ESL, Workforce De­velopment and Family Behavioral Health. The center will be run in conjunction with the K-8 charter school and Asian Human Services. Passages Elementary School is a global school open to everyone, with a focus on the needs of immigrant and refugee students.

“The early education center at Passages Elementary School will help prepare students with the quality education they need to launch a successful academic career,” said Alderman O’Connor, 40th Ward. “Passages Elementary School helps students get the great start they all deserve, and with this investment from the city they can start laying this foundation even earlier.”

On Wedenesday, July 18, at Del Kar Pharmacy in North Lawndale, the Mayor  announced the new #ChicagoRxCard, which will help Chicagoans save money on prescription drugs and get more transparency on drug pricing.. “Making prescription medicine affordable for Chicagoans is the ultimate goal for the #ChicagoRxCard” said the Mayor.

The CityKey Card is an optional, officially recognized government-issued  identification card that you can use to access a range of public and private services.  It is designed to reduce barriers to those who have difficulty accessing traditional government-issued
identification, such as undocumented immigrants, youth, the homeless, transgender residents, domestic violence survivors, and those recently released from incarceration.

Learn More About the ChicagoRxCard

Click Here to Learn More About Applying for Your Own

Press reports suggest that the Trump administration may soon act unilaterally to put forward proposals that will restrict access to immigration for applicants with incomes under $60,000. For example, various leaked proposals would put immigrants at risk if they — or potentially their families, including children born in the United States — get health care under Medicaid or Obamacare (the Affordable Care Act) or if they get help under the Earned Income Tax Credit. Olivia Golden said “compromising a child’s ability to thrive is not only immoral, it’s deeply damaging to the future of our nation” during a press call this week, where advocates decried the leaked proposals.

Today ALMA, the Hispanic Lawyers Association, La Casa Norte marched in unity with the Latino Policy Forum and thousands of others against the anti-immigrant to policies of the President and his Republican allies in Congress

On Thursday, April 5, the Illinois Coalition for Immigrant and Refugee Rights (ICIRR) and our campaign partners won the prestigious Power of Community Awards as part of the 2018 Chicago Neighborhood Development Awards. 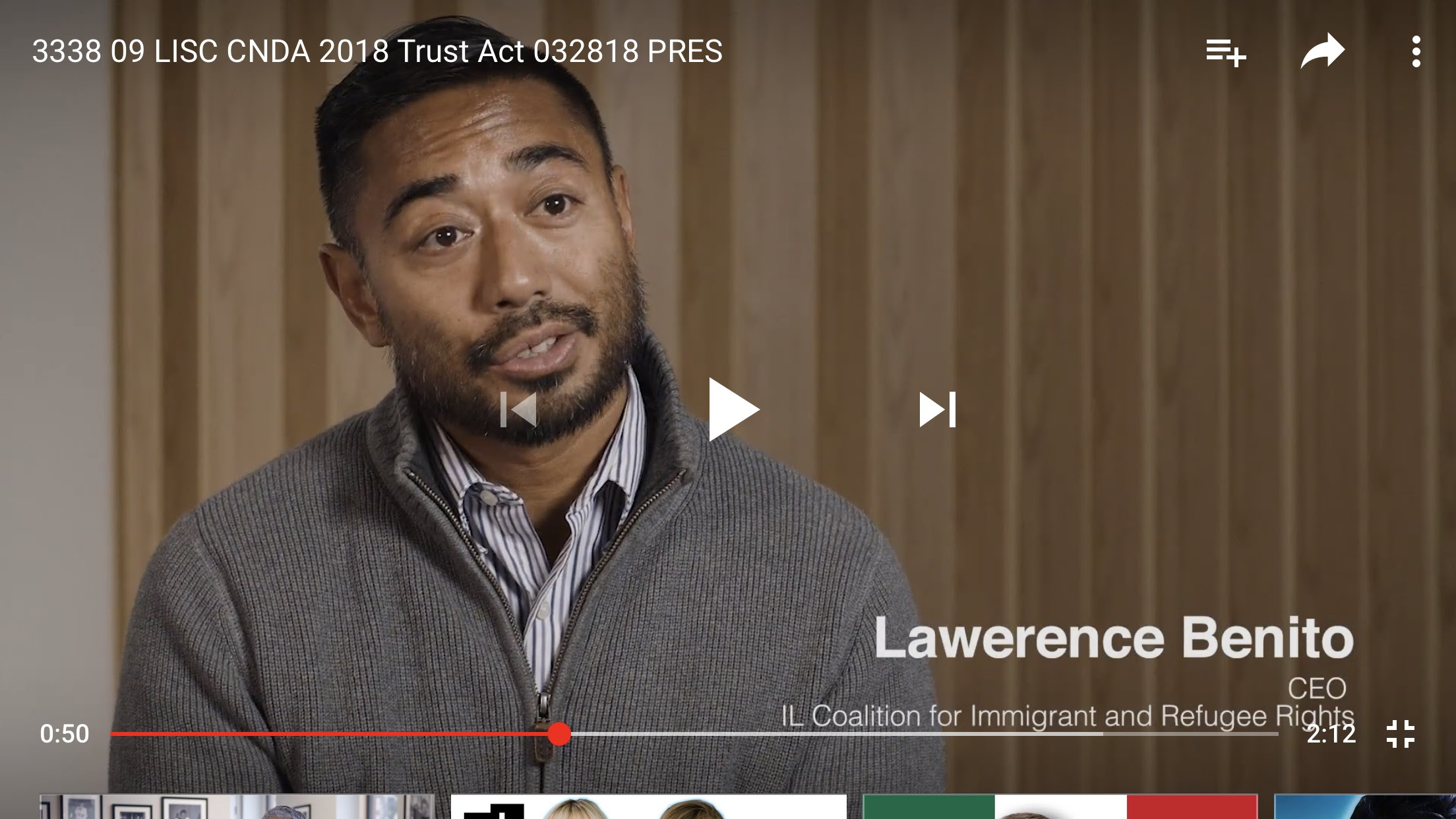 The award recognized our collective success as part of the Campaign for a Welcoming Illinois in organizing to draft and pass the Illinois TRUST Act. The campaign is co-convened by ICIRR, Asian Americans Advancing Justice | Chicago, and PASO (West Suburban Action Project), engaging over 80 community, labor and policy organizations throughout Illinois. As a result of this victory, no law enforcement agency in Illinois can detain any individuals or turn them over to ICE if ICE does not have a warrant signed by a judge. Our work has once again put Illinois in the forefront as having one of the strongest and most expansive statewide protections against deportation in the country.

This award belongs to all of our partners, and we want to thank and congratulate you for this amazing accomplishment. 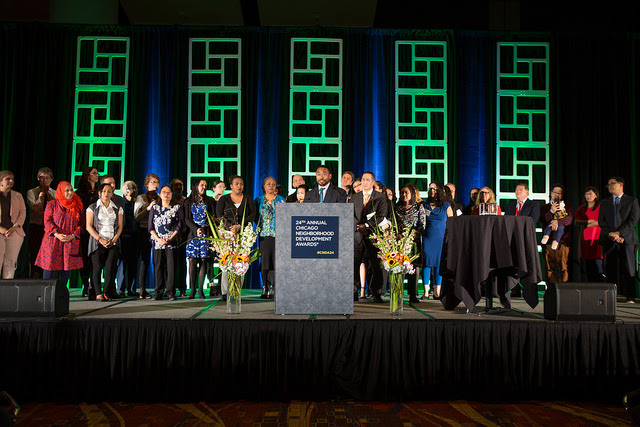 Our work is not done! We continue to fight through the Campaign for a Welcoming Illinois to make Illinois the most welcoming state in the country.

Here are three things you can do to help support this work.

Please let me know if you have any questions or concerns. We expect greater movement around this bill within the next two weeks and will keep you abreast of updates and further social media pushes as the timeline moves along.

In light of the recent raids that happened in Oakland, CA, we want to make sure that the community is prepared in case ICE tries to conduct similar operations in the Chicago area and Illinois.

While we do not want to create panic in our communities, we want to make sure we are all informed and prepared.

ICIRR’s toolkit available in English and Spanish contains information and tools that should help you and your organization respond if ICE conducts raids in your community.

WHAT WE DO NOT KNOW:

KNOW YOUR RIGHTS! WHAT TO DO IF ICE APPEARS AT YOUR WORKPLACE: